Reception celebrated with a Christmas dinner.  Roast turkey with all the trimmings, Christmas music and of course crackers, silly hats and bad jokes.  Merry Christmas everyone!

We had a special visitor in our Bushcraft area.  Santa Claus came to visit and handed out treats and gifts to the children.  Reception were so excited to see Santa and enjoyed catching their gifts at the end of the slide.

Hanging Christmas wishes on the tree 🎄

Reception have been enjoying learning about the celebration of Christingle. They all made their own, decorating them with sweets and fruit. They learnt about the importance of each part and what it represents.

Do you believe?  Reception received a golden ticket and wore pyjamas just as the children in the film did.  We watched this magical movie on the big screen.  Each ticketed passenger was  served warm hot chocolate.  Santa left Reception their very own 'first gift of Christmas' a bell from his sleigh!

This week Reception received a special visit from Jacqueline Atkinson from the Holy Spirit Church and she shared the Nativity story.  The children used wooden characters to retell it to their friends and practised their cutting skills while making their own Nativity scene.  Decorating the loose parts Christmas trees has been a popular choice this week.  Look at our beautiful designs!

We used our phonic knowledge to independently write labels.

Reception had a wonderful morning full of dancing, party games and party food.  Don't we look fantastic in our party clothes!

Reception were filmed singing the song "Christmas Calypso" on Thursday.  Our whole school Christmas carol show will be released on the school YouTube channel.  The children looked amazing in the their costumes and enjoyed performing.  Well done Reception! 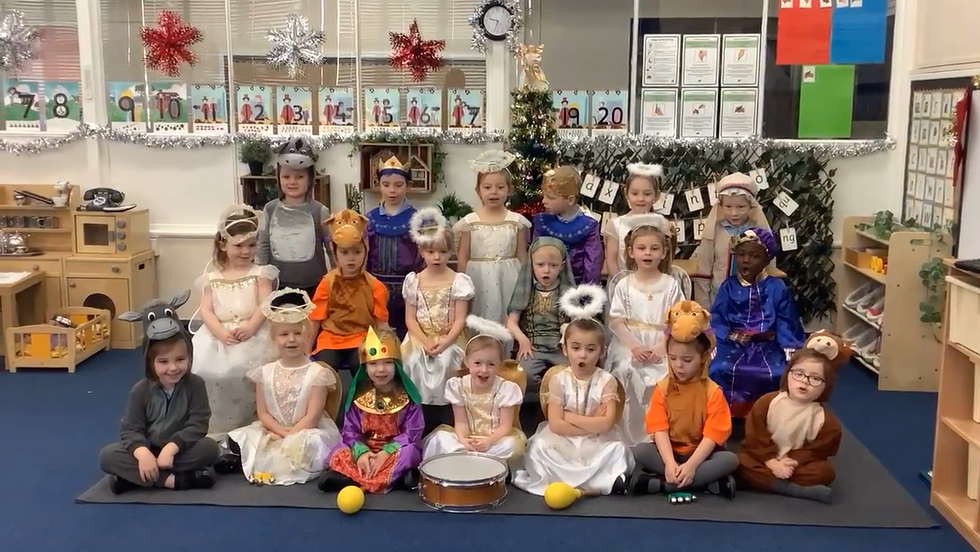 Reception class have been practising for our performance. We worked as a team to decorate our class Christmas tree.

Reception were introduced to 'Zola' a Christmas elf who read a magical story about animals across the world and which Christmas presents would suit them best.  The children made lots of predictions about which gift would be most appropriate, before getting to meet the animals and find out.  Reception were introduced to many exciting creatures including a tarantula, snake, giant snail, rat and even a hissing cockroach.

Reception have enjoyed a space themed week inspired by the Jill Murphy story “Whatever Next!”.  The children used props to act out the story.  We have been practising how to use finger spaces when writing a caption and using 'Fred talk' to sound out words from the story.

Reception listened to the opposing music compositions Mars and Venus from Gustav Holst’s “The Planets”.  We moved and drew shapes in response to the loud and angry then calm and quiet music.

We were off to the Odeon cinema to watch Paw Patrol The Movie, as part of this year’s Into Film festival.

Our story of the week is "Rosie's Walk" by Pat Hutchins.  We used position words and a map to retell the story.

In Maths we were challenged to spot and describe 'Where is Rosie?' the hen and played position bingo in a group.

Thank you to all the families who have helped us to support Children in Need once again this year by sending their children in non-uniform and giving donations.  What a fab day we have had, and we raised money for a great cause at the same time!  The children enjoyed colouring in pictures of Pudsey Bear and made their own spotty cupcakes.

In dance we used counts of 8 to know when to change an action.  We pretended our hoops were bubbles and practised travelling and working in a space.

Reception helped to weed and turn the soil in the beds.

Reception observed the two minute silence on Remembrance Day.  We watched the Cbeebies animation 'Poppies' and talked about how the rabbit was feeling. The children used loose parts to make their own poppy designs.

Reception listened to a story about Dipal and his family celebrating the Diwali festival of light.  As part of our finger challenges this week the children created jewelled pathways for Sita.

We made our own beautiful mehndi pattern designs.

Sparks in the Sky

Reception listened to the bonfire night story "Sparks in the Sky".

Our independent brave write this week was all about bonfire night.  We used a robot 'Fred talk' voice to sound out words.  Reception described the firework noises and spectacular sights they could see.

In Maths we have been learning the names of flat shapes and describing them.  We used the shapes to make our own firework pictures.

We drew, decorated and cut out a paper firework.  This was attached to a narrow straw and placed inside a wide straw.  Look what happened when we blew ...

We had a competition to to see who's went the furthest.  Mia, Ella and Jacob were the winners!

"Room on the Broom" by Julia Donaldson

Reception wrote their own spooky spells.  We used a 'Fred talk' robot voice to sound out words.  Look at our fantastic writing!